​It is a series for children, approximate age 5-10 years. At the moment contains 5 books, which are ready for printing.
Can be 16 / 24 / 32 pages. Size: 220 X 286 mm.
​Every book has it's own coloring book in addition (16 pages, 220 X 286mm.) It is possible first print thin books, then collect in thick - gift.
Illustrations are scanned and processed on a computer, correspond to the world level, very colorful and spectacular. For publication, books are provided in digital form, almost ready for printing.
These books were published in Russia and Lithuania.

A fictional character invented by Victor Shatunov, “Raven Machausen” is a prototype of the well-known Baron Munchausen (Rudolph Erich Raspe) prototype, which has his own new stories. Viktor’s Raven Machausen travels on Arctic; cheated his Death, when she came; there are a lot of different ingenious stories…
Heroes are similar in their ingenuity, wit, an irresistible desire to always embellish the truth. Each book in this series is a new story, you can say a new rework, which gets the main character.

Characters and stories provide opportunities for television and video production. Each story is unique and original. The hero is perfect for animation and could become a hero of a colorful adventure cartoon. If necessary, you can create additional products with this hero - posters, notebooks, icons, board games and stuff. 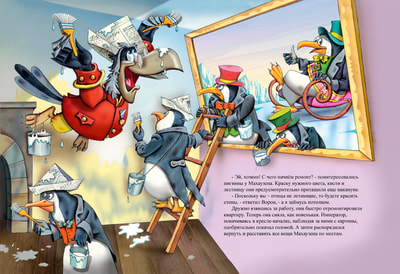 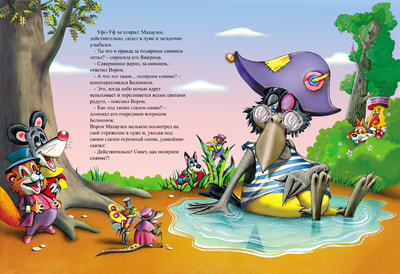 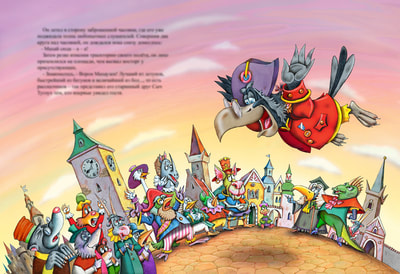 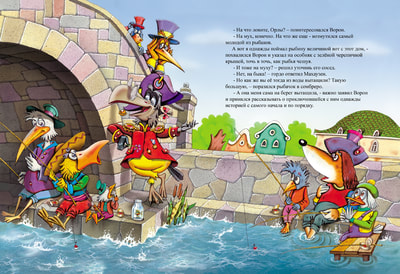 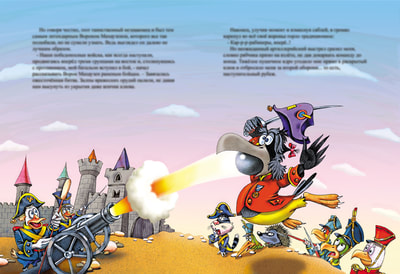 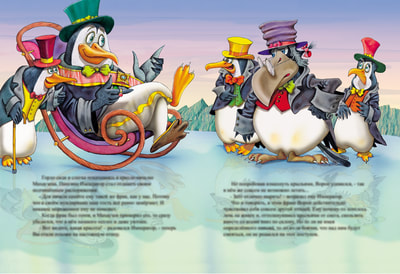 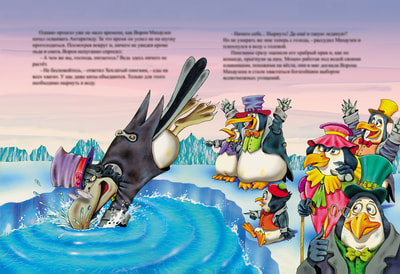 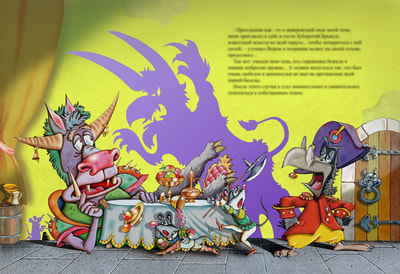 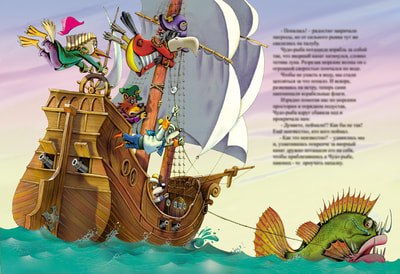 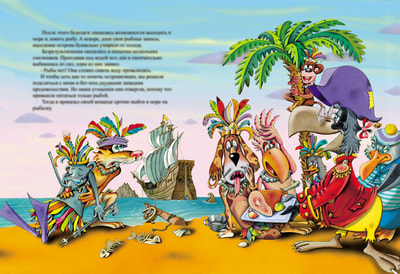 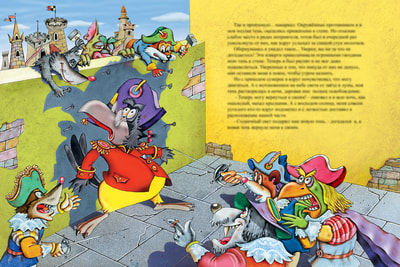 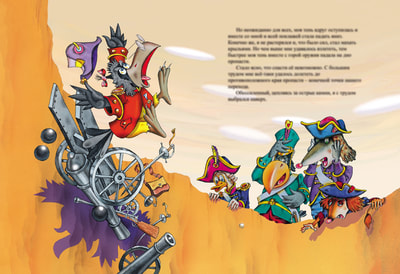 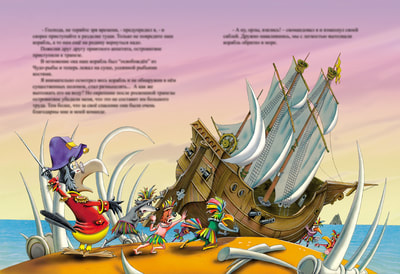 More information about the Raven Machausen:

On the incredible adventures of a brave storyteller and liar, who devises the most incredible stories, you will learn about the "adventures of Crow Mausen". Without a moment doubting the success of the miraculous feats attributed to himself, he easily emerges victorious from the difficult situations that fate has given him. But not always the story told by Raven coincides with what the author wrote and painted. An ingenious spectator will choose himself to whom the truth belongs and, I hope, will fall in love and make friends with this extraordinary narrator.
Raven Machausen is ... as you probably already guessed, it was invented by me as a literary hero in 1996 in Moscow. If in brief and in general terms to describe his character, then Raven Machausen is a very bright character. "- The best of the flayers, the fastest of runners, and the greatest of bol ..., that is, the storytellers - was so represented by his old friend Owl Tugouh to those who first strived to meet the guest." He can be anything: evil, kind, cunning, in love , naive, like a child - in general it all depends on the situation in which it turned out. Even at the beginning it becomes clear that we are not dealing with a "simple bird". He is not ordinary in everything. In their actions, desires, behavior ... Even the objects that surround him in everyday life can take in his unusual life the most unpredictable participation! Perhaps this is the most important line in the script. Unexpectedness and unpredictability is what makes my series the most winning and noteworthy. It is impossible to predict how events will unfold in the future. And this means that you do not get bored with him!
The purpose of creating such a series - the development of children's imagination, imaginative thinking and ingenuity. Unfortunately, due to the 1993 default, a series of five books never appeared in Russia (some books were published only in Lithuania, in Lithuanian).
In the series I wanted to imagine a lot of unusual and diverse characters. Sometimes just in fantastic situations. If you are interested in Raven Machausen, then we could continue our joint cooperation.

These are thin booklets-brochures of 16 or 24 pages. All the books are fully illustrated, so to imagine everything that is written about is not difficult, and since all this was created a very long time, at the present time I do not rule out improvements and changes.
Each book is a separate story, narrating about a new adventure from the life of the unforgettable Crow Mausen.
Sixth and seventh books are started, as a continuation of the previous five books, but not yet finished. Continue the series to infinity! There are a lot of new ideas. 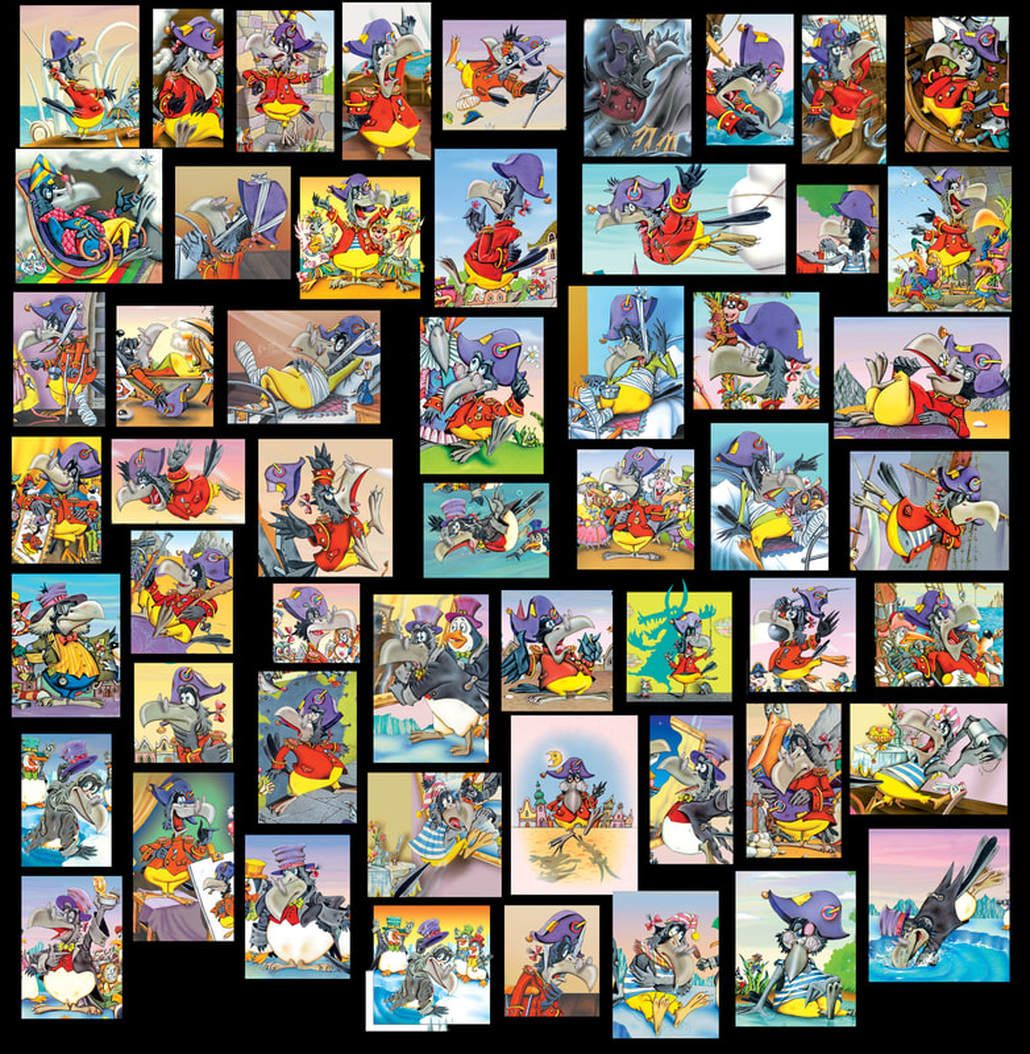